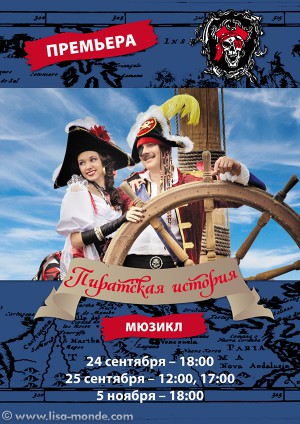 A pirate ship ‘The Red Orchid’ is sailing somewhere in the vast expanses of the South Seas. Its captain, one-eyed Claude Sid, is famous for his cruelty. Under his leadership the valiant filibusters are seeking fame, adventures and gold. His cherished desire is to find Miraclion, a lost island, where immense treasures are hidden. However, pirates have not had any good luck in a long time. The Captain seems to be clueless of what course to steer. The crew starts to growl and grumble. Being obsessed with a desire to become the leader of pirates, Alf, the first mate, instigates Gnat, the boatswain, and Albus, the navigator, to organize a mutiny against the captain. Captain’s girl-friend Sam, the singer, is on their side as well. The cunning traitors organize a coup. The Captain is on the verge of death. However, a sudden appearance of the ghost of Mary-Ann, a governor’s daughter, once killed by Captain Sid, spoils the plans of the rioters. She comes to pardon the Captain and save his life.

Pirates of the Caribbean
You promised me

Video from the Show: