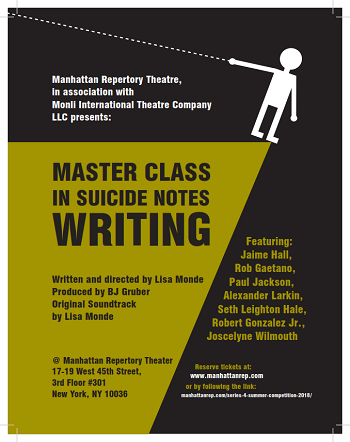 Premiered on: July 26 at the Manhattan Repertory Theater as part of the Summer One Act Play Competition 2018, NY

Philology professor – Scott Mirrormord – conducts a master-class in writing suicide notes for potential suicides, which consists of four classes. In this shorter version of the play the spectators find themselves at the first meeting, where the main goal is to discuss how the participants of the master-class are planning to depart from this life and for whose sake they are committing the action.

Six anonymous participants – five men and a woman – join the master class. One of them completes his draft of the suicide note and commits the act, as soon as he leaves the room. How does the story develop and what awaits each of the remaining participants in the future? Will they follow through with their decision to end their lives?